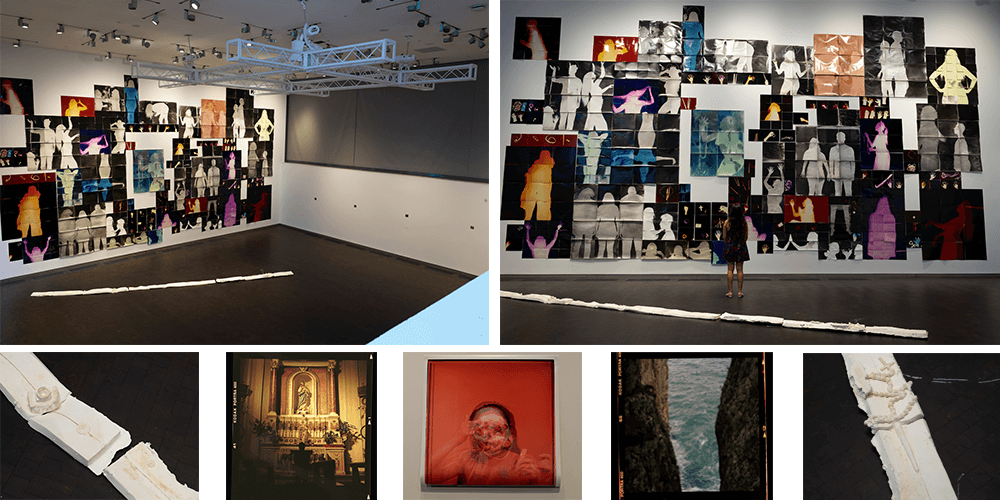 I want to talk about the titular incorruptible body.

Incorruptibility is the Catholic belief that divine intervention allows human bodies to avoid decomposition after death as a sign of holiness. It's a little misleading though, because it doesn't need to be a complete body—it could be just a perfectly preserved pinky, or what is called a relic. Catholic relics are held with great preciousness in containers, and are used in blessings.

So this show is rooted in three things:
1) Angélica's faith,
2) her cultural heritage, and, of course,
3) her body.

In this show I find an empathy and also a tension between Catholicism and the Day of the Dead. The photograms and the plaster piece lie under the watchful eye of the Catholic incorruptible body, but are specifically inspired by Day of the Dead altars. Just as our Catholic relic, the pinky, is physical evidence that the larger incorruptible body once existed, here, the plaster altar objects are homages and celebrations, filling the void without presence with objects representing memories and past relationships. The photograms are anonymized, taken out of space and time. In both traditions, you have only traces of the body; just like a footprint in the earth—the first human trace, the first presence of gesture—you have to believe the body was there.

I'm interested in the theme of segmentation in the photograms and the plaster piece. A relic is a segment of the body divorced from its whole. Here we have segments of the body—human bodies and a plaster body—that are internally split largely but maintain their integrity within a unified frame. So it seems there's a desire to avoid that traditional understanding of the incorruptible body as translated through a relic; maybe, then, it's a matter of segmentation at a larger scale. The question is, of course, what larger idea is being pointed to?

There's this commonly traded idea that some early cultures believed that a photograph would trap and corrupt the soul through magical intervention. Angélica's show, on the other hand, captures and preserves the soul through scientific intervention—mechanical equipment as extended appendages, chemical ingredients nourishing the photograms and casts. It's worship and intimate expression through technological mediation.

Angélica told me there's a Catholic belief that bodies and ashes should be buried in Catholic cemeteries. During the second coming, these dead bodies will be remade. I want to end on this theme of burying and uncovering. The art and science of archaeology is a process of imperfect recovery. As an artifact is revealed to air and light, it immediately begins deteriorating. This center photogram, with its amorphous borders, has the soul of such an artifact: it was prematurely removed from its chemical fixer, so it will continue to change over time. Circling back to the title of the show, and despite it, I think there's something really wonderful and interesting about the centrality of, whether through imperfect science, or maybe imperfect faith, this ultimately corruptible body, and its place in the show.