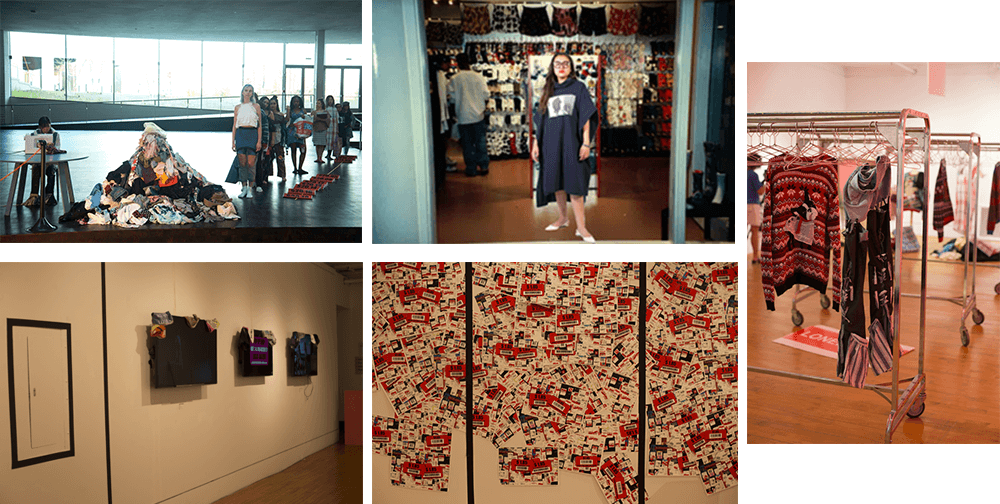 In the past, Gabby has shared with me her difficulties communicating her thoughts, especially in a setting like a critique, where there's a certain shared vocabulary, context, and tone everyone else seems to be keyed into. For myself, I feel that speaking about art, especially one's own work, requires a balance between vulnerability and distance—the need to speak genuinely about something intensely personal while also abstracting, or dissecting, it into an intellectualized and digestible take, which is then consumed by and subsumed into a larger conversation completely out of your control. This theme of communication is why I'm interested in Gabby's use of fashion as her medium of choice for her senior show. I think for Gabby, this show has been about negotiating that tension between vulnerability and distance: where you open yourself up in a way that's accessible but not necessarily transparent.

As Gabby's studiomate, I've witnessed both her hard work going into and her traumas coming out of this show. When we look at a mannequin wearing these clothes, we see a fun assemblage of fabrics into some themed set—which I feel like is usually how fashion works for the common man. It's something experienced at a distance: everyone wears clothes, but not everyone knows the tactile sensation of deconstructing and rebuilding a garment from the seams up. Gabby Chu does, and for her each outfit isn't just fabric on a hanger. They represent a series of masks being removed from her own self. Even as another's body is being covered up, her own is being revealed.

Gabby mentioned that the the process of making this show has been important for her not just artistically but also personally. The large draping blue garment, Phantom Mole, has her dad's photography stitched to the front and back. She goes into detail about the piece in her pamphlet, but I was particularly struck by the way she explained the piece to me a few weeks ago: "My dad communicated his pain through photography." This strikes me again as being part of that tension between vulnerability and distance, trying to communicate but being unwilling, or unable, to speak the words.

Yesterday at the fashion show, I noticed that as models walked the stage circuit the audience would occasionally giggle or outright laugh. Part of this came from the models' funny poses and expressions, but I think the laughter was also sourced in a kind of a shared delight at familiar faces and forms made surprising. I think being able to tap into those relationships is really powerful, and even though this show isn't Fashion Speaks (a charity fashion show hosted by a Princeton organization), I think that with $1.85, Fashion Spoke.